Lim Young Woong‘s “Can We Meet Again” and LE SSERAFIM‘s “FEARLESS” contended as the top choices in the second week of May on KBS2’s “Music Bank,” which aired on the afternoon of May 13th.

On this day, LE SSERAFIM was just one nomination away from being nominated for the top slot in a broadcast music program following its debut, and it drew notice by defeating Lim Young Woong, who is known for his strong fandom.

Lim Young Woong and LE SSERAFIM both received 7035 and 7881 points. “Music Bank” topped the charts in the second week of May.

The number of broadcasts separated the two singers’ joy and sorrow.

Lim Young Woong was considerably ahead of LE SSERAFIM in terms of digital music and album scores, although LE SSERAFIM had 5348 more broadcasts.

Every week, “Music Bank” calculates the ranking by aggregating points from 60% of digital music, 20% of broadcasting, 10% of viewer choice, 5% of record sales, and 5% of social media. After digital sound sources, the number of broadcasts is the second highest.

LE SSERAFIM members covered their mouths or appeared perplexed, as though they couldn’t believe the results.

“Thank you CEO Choi Sung Jin and producer Bang Si Hyuk for assisting us with our debut album,” said leader Kim Chae Won, adding, “Thank you to our fans, we were able to receive this much love. Thank you. We’ll show you a lot of fantastic performances with ‘FEARLESS’, so please look forward to it.”

However, several viewers said after the broadcast, “The moment has come to grant honors for the number of broadcasts even when the album is all high,” “Is it a fair ranking?” and “When Taeyeon and Kim Woo Seok were nominated, they did that again.”

Meanwhile, LE SSERAFIM is a girl group produced by HYBE, led by producer Bang Si Hyuk, who raised the worldwide idol group BTS, and is making its debut with full support from HYBE. It also recently topped SBS MTV‘s “The Show.” 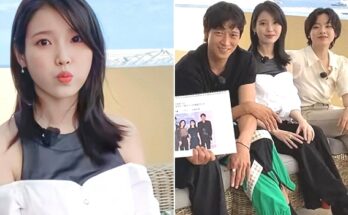